Size Wars: Return of the Small-Cap 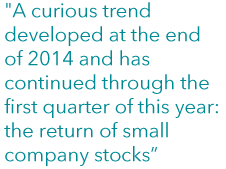 The chart below shows the 12-month rolling return difference between the S&P 500 Index and the Russell 2000 Index.  As you can see, large-caps reached a peak level of outperformance vs. small-caps on October 1 of last year, at 16.1%.  This was almost exactly at the average peak outperformance we have seen over the past twenty-four years.  Perhaps not surprisingly, since October 2014 small-cap companies have begun to outperform the S&P 500 Index.

Following such strong returns in 2013, we were hesitant to make any bold predictions about future small-cap performance last year.  Today, when we look at what seems to be a budding trend of small cap outperformance, we feel more confident.  Here are four reasons why the recent trend of small-cap outperformance may be just the beginning: a strong dollar, higher earnings growth, abundance of quality companies, and potential earnings power.

Strong dollar is a positive for small-caps

As we explored in our research paper Dollar Strength and Small Cap Stock Returns, historically a strong dollar has been better suited for small-cap stocks than large-caps.  A strong dollar hurts multi-national corporations as foreign buyers see U.S. goods as more expensive compared to non-U.S. goods.  Since smaller companies rely more on domestic revenue, small-caps can thrive under these circumstances.  We believe any ongoing trend of dollar strength should continue to propel small-cap relative returns.

Where can investors find growth?  The earnings growth forecast by large-cap companies has largely disappeared after several years of strong performance.  As seen in the table below, the Earnings per share (EPS) growth forecasts for small companies  is 24% for 2015, as compared to just 4% for S&P 500 companies. In fact, quality small companies which have been largely ignored by the market are providing investors with the highest earnings growth potential and at modest multiples.

Quality companies and return on capital

With many thousands of companies to choose from, small- and micro-cap investors potentially have an advantage because they can build a portfolio that bears little resemblance to the benchmark.  In our opinion, the current environment presents significant opportunities for bottom-up investors who focus on quality companies.  Quality, as measured by return on capital (ROC), is in short supply if you are stuck in the micro-cap index.  For an active manager, however, focused opportunities are abundant.  As seen in the table below, the ratio of companies creating a positive return on capital versus those losing money is five-times greater in PRCGX than in the broader micro/small-cap market. 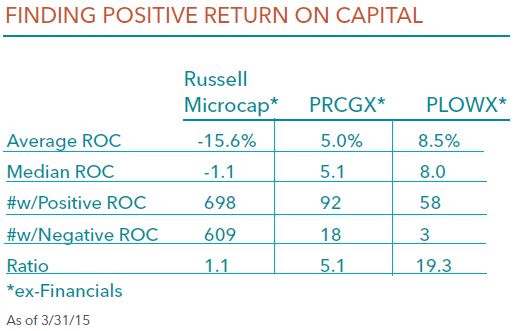 Case Studies: Outlook for Earnings Power on the Horizon

You can’t have strong small-cap relative returns without outstanding small companies.   In our first quarter’s Advisor Insights Slides, we provided nine case studies of micro-cap companies we believe are poised for success.  Call or email us if you would like to see that full presentation.  Below is a highlight: 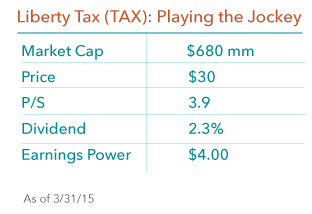 Liberty tax is the 3rd largest tax franchise company in the world, and you may know its leader.  CEO John Hewitt has a past record of success, having built Jackson Hewitt to 1300 offices within a 15 year period before selling to Arthur Anderson for $483 million in 1997. We invested with Mr. Hewitt during his tenure at Jackson Hewitt and are excited at the prospect of his goal to build Liberty Tax into the largest preparation tax service company. The company recently introduced a quarterly dividend, showing evidence that management (40% insider-owned) is confident with its business model.  TAX trades at 15 times forward earnings, but based on our analysis we believe earning power is in excess of $4 per share within the next three years.

Once again, the Russell Microcap Index’s performance was driven by biotech companies in the first three months of 2015.  In the quarter, the biotech sector returned an astonishing 23.2%, as compared to just 8.5% for the second-beset performing sector (Consumers Services?) and 3.14% for the Russell Microcap Index as a whole.  We have spoken at length about the biotech story and what it may mean for investors in recent commentaries.  As a reminder, since 2010, there has been a 50% increase in the healthcare weight of the Russell Microcap Index, and more than ½ of the index is now represented by just two industries, healthcare (26.9%) and financials (23.7%).  We don’t know exactly when or how this plays out, but it certainly poses risks to passive micro-cap investors.

As a reminder to our shareholders, the Perritt Low Priced Stock Fund (PLOWX) will earn its three-year performance track record on June 30th 2015. The Fund invests in micro-cap and small-cap stocks priced under $15 per share and $3 billion market capitalization, using the same disciplined Perritt investment process and team.  Please check back at the end of June for PLOWX’s three year performance number!

Fund holdings are subject to change and should not be considered a recommendation to buy or sell any security.

The Russell Microcap Index is a capitalization weighted index of 2,000 small cap and micro cap stocks that captures the smallest 1,000 companies in the Russell 2000, plus 1,000 smaller U.S.-based listed stocks.  It is not possible to invest directly in an index.

Price-To-Sales Ratio (P/S) is a tool for calculating a stock’s valuation relative to other companies, calculated by dividing a stock’s current price by its revenue per share.

Price-To-Book Value Ratio (P/BV) is a ratio used to compare a stock’s market value to its book value. It is calculated by dividing the current closing price of the stock by the latest quarter’s book value per share.

Price-Earnings Ratio (P/E) is a valuation ratio of a company’s current share price compared to its per-share earnings. It is calculated as the market value per share divided by earnings per share.

Russell 2000 Index is an index measure the performance approximately 2,000 small-cap companies in the Russell 3000 Index, which is made up of 3,000 of the biggest U.S. stocks.

S&P 500 Index is an index of 500 stocks chosen for market size, liquidity and industry grouping, among other factors. The S&P 500 is designed to be a leading indicator of U.S. equities and is meant to reflect the risk/return characteristics of the large cap universe.

Return on Capital (ROC) is a return from an investment that is not considered income. The return on capital is when some of all of the money an investor has in an investment is paid back to him or her.

Forward Earnings is a company’s forecasted, or estimated, earnings made by analysts or by the company itself.

Russell S&P/Delta is the rolling 12 month performance each quarter of the Russell 2000 minus the S&P 500 Index.