Return to all Research and Whitepapers

Investors have seen a resurgence in the dollar recently, causing many to examine if the current dollar strength is indicative of future behavior in the stock market. History has in fact shown that a stronger dollar has been better suited for Small-Cap stocks than Large-Cap stocks. Currently, we believe that the dollar is strong for a few reasons. The first one being that US interest rates (while historically low domestically) are higher than worldwide markets. The second reason for a strong dollar is the strength of the current U.S. economy. With these characteristics combined, the strength of the dollar should continue its run, leaving us to ask: Will the money begin to flow to Small-Cap stocks?

During periods of dollar increases of 15% or more, Small-Caps, as represented by the Russell 2000 Index, has achieved an annual total return of 13.2% versus 10.3% for the S&P 500, which represents Large-Cap stocks. On the flip side, when the dollar was weak, Small-Cap stocks compounded at 9.5% compared to the S&P 500’s return of 11.1%.  In the below chart you can see the historical relationship between the dollar and small-cap returns starting in the 1970’s. 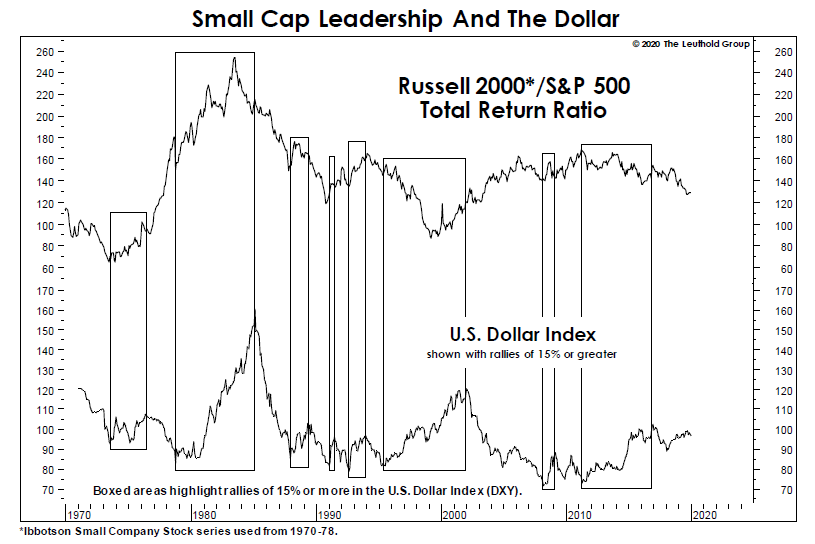 Why is a strong dollar good for Small-Caps?

In our opinion, small-caps are more levered to the domestic economy than larger companies are. Small companies are more likely to sell products domestically, insulating them from the loss of competitiveness and currency translation impact of a stronger dollar.  When the dollar is strong, multi-national corporations lose a competitive advantage, as foreign buyers see U.S. goods as more expensive than non-U.S. goods.

Another less discussed idea is that a stronger dollar may end up having similar effects as did the Fed’s Quantitative Easing (QE). Money looking for return generally flows toward more “risky” assets, such as Small-Caps. One possibility is that instead of the Fed pumping more dollars into the market, it will be foreign investors looking for better returns who will be pumping dollars into the market. Just when the Fed ends QE, it appears foreign buyers are stepping in looking for dollars and dollar-denominated assets. QE has been very positive for stocks in general and Small-Cap stocks in particular. Could the strong dollar be signaling a new round of increased risk appetite for US assets?

We like to say that “history doesn’t repeat, it rhymes.” In the above chart, investors will see that in some cases (an instance in the late 1990’s) Large-Caps outperformed Small-Caps in the time of a strong dollar. With the recent re-emergence of dollar strength beginning in April of 2011, we see a potential “rhyming” effect with late 1970’s-early 1980’s positive outperformance for Small-Cap stocks.  Investors who wish to participate in improvements in the U.S. economy and rising dollar may wish to look to small/micro-caps with more domestically-driven revenue sources, and potentially more attractiveness to foreign dollar flows. Buy small, Buy American, it could be the trend for 2020.

The S&P 500 Index is a broad based unmanaged index of 500 stocks, which is widely recognized as representative of the equity market in general.

The Russell 2000 Index consists of the smallest 2,000 companies in a group of 3,000 U.S. companies in the Russell 3000 Index, as ranked by market capitalization.

The U.S. Dollar Index is a measure of the value of the U.S. dollar relative to majority of its most significant trading partners. This index is similar to other trade-weighted indexes, which also use the exchange rates form the same major currencies.

Small-Cap Stocks are defined as deciles 6-8 of securities ranked by market capitalization from 1926-2019. Large-Cap Stocks are represented by the S&P 500 Index.

You cannot invest directly in an index.