As they say on Main Street, we (retailers) are having a sale, so come look at our bargains. I have always found it fascinating that sales in retail or Main Street are met with cheers and excitement, but sales on Wall Street are met with gloom and depression. Before we consider the “bargains” on Wall Street, let’s take a look at how the stock market has performed recently.

As measured by the S&P 500 Index and the Dow Jones Industrial Average, large stocks experienced their biggest fall ever for the first five trading days of January and the worst for any week since September 2011. The Dow Jones Industrial Average lost 6 percent and the S&P 500 Index lost 6.2 percent in the first week (1/1-1/8/16) of January 2016. Thanks to dividends, the S&P 500 Index eked out a 1.4 percent gain in 2015, but the Dow lost 2.2 percent. Smaller stocks fared even worse. The Russell 2000 Index lost 7.9 percent in the first week of January while the Russell Microcap index lost 8.2 percent. These declines came after losses in 2015 for both the Russell 2000 Index and the Russell Microcap Index. As we have said several times in the past, the small-cap market has been in a stealth bear market, but this decline in the Russell Microcap Index officially puts that index in bear market territory. The complete index performance numbers can be viewed in the table below.

Here is a review of the breadth of the smaller-cap market. As the table below indicates, the average stock once again performed worse than that of the small-cap indexes. The table shows that 2,166 stocks declined last year and 1,480 stocks rose last year. The table does not show that the majority of stocks that rose last year were lower quality stocks in our opinion. In addition, the majority of the 2,166 stocks that declined last year were very severe. In other words, the majority of the declines were in the bear market zone (greater than 20%).

We believe recent trends bode very well for active managers of small- and micro-cap stocks. The biotech segment of the market has started to show signs of stress, dragging index performance down with it. As we started to see in the second half of 2015, active managers that focus on quality companies can provide investors downside protection. And there are many opportunities with attractive valuations, as we discuss next. 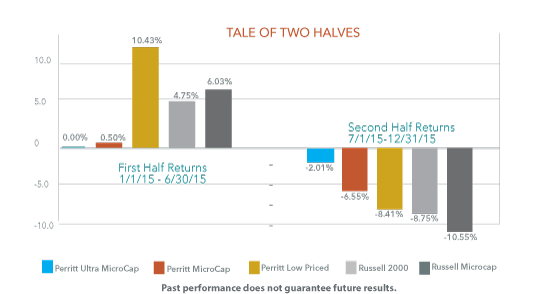 Why have stocks declined severely recently? There are certainly some weakness in some economic indicators, but not all indicators. For example, the Purchasing Managers’ Index ticked below 50, which can be an indication of future weakness in the economy. However, jobs creation and unemployment has both been moving in a positive direction. The Federal Reserve finally raised interest rates last month, which some say could slow growth further. We, however, believe that a one-quarter interest rate hike or even a couple more will have very little impact on the economy. The real decline in stocks, in our opinion, is related to the China market. While the China market does have an impact on the world economy, we believe smaller stocks are not influenced by the China economy. In fact, the majority of the companies in our portfolios have no exposure to China. This brings us back to one of the “bargains” on Wall Street.

Our largest holding firm wide is Atlas Financial (AFH), which is the largest insurance provider to cab companies and other transportation companies (yes, they do some business with Uber). Not only do we see no impact from China, we believe AFH’s business will be hardly hurt from a weaker economy. The company’s stock has declined recently by more than 15 percent from its recent high, but the business in the past few years has grown well in excess of 20 percent, and we don’t see that growth rate stopping. AFH shares trade for a little more than 10 times 2016 earnings estimates as of 12/31/2015.

Regardless of the valuation characteristics you use, valuations are more attractive for smaller-cap stocks versus that of larger-cap stocks. The table above breaks down the smaller-cap market by market-cap buckets. While the valuations for smaller stocks are not the lowest in history, they are more reasonable than larger stocks. For example, companies with market caps above $2 billion trade at price to book values near 2.7 times, while companies with market-caps less than $500 million trade at less than 1.6 times book.

Valuations also look more attractive for smaller stocks from just a few years ago. The table below shows the price earnings ratios of those stocks by market-cap buckets for the past three years. These valuations don’t take into account the 8 percent decline in the first week of January 2016. So, the two smallest market-cap buckets are now estimated to be trading at price-earnings ratios of 14 or less. In addition, according to Capital IQ, analysts estimate that earnings will grow well into the double digit levels this year. Therefore, price-earnings ratios based on 2016 estimates are trading near 11 times, which is a bargain in our opinion!

Price-To-Sales Ratio (P/S) is a tool for calculating a stock’s valuation relative to other companies, calculated by di-viding a stock’s current price by its revenue per share. Price-Earnings Ratio (P/E) is a valuation ratio of a company’s current share price compared to its per-share earnings. It is calculated as the market value per share divided by earnings per share. Russell 2000 Index is an index measure the performance approximately 2,000 small-cap com-panies in the Russell 3000 Index, which is made up of 3,000 of the biggest U.S. stocks. Russell Microcap Index is a capitalization weighted index of 2,000 small-cap and micro-cap stocks that captures the smallest 1,000 companies in the Russell 2000, plus 1,000 smaller U.S.-based listed stocks. S&P 500 Index is an index of 500 stocks chosen for market size, liquidity and industry grouping, among other factors. The S&P 500 is designed to be a leading indicator of U.S. equities and is meant to reflect the risk/return characteristics of the large cap universe.  Dow Jones Industrial Index is a price-weighted average of 30 significant stocks traded on the New York Stock Exchange and the Nasdaq. Purchasing Managers’ Index (PMI) is an indicator of the economic health of the manufacturing sector.  The PMI index is based on five major indicators: new orders, inventory levels, production, supplier deliveries and the employment environment.  Price Earnings Ratio (P/E) is a ratio for valuing a company that measures its current share price relative to its per-share earnings.  TTM P/E is the trailing twelve months P/E.  Price-to-Book Value Ratio (P/BV) is a ratio used to compare a stock’s market value to its book value. It is calculated by dividing the current closing price of the stock by the latest quarter’s book value per share. Market Capitalization (Mkt Cap) is the total dollar market value of all of a company’s outstanding shares. Market capitalization is calculated by multiplying a company’s shares outstanding by the current market price of one share. Average stock is the average value of a stock over an accounting period.  TEV/Rev – Total Enterprise Value/Revenue is a valuation measurement to determine whether a stock is priced well.  Breadth – gauges the direction of the overall market by analyzing the number of compaines advancing relative the number declining. Earnings Before Interest & Tax (EBIT) is an indicator of a company’s profitabilty, calculated as revenue minus expenses, excluding tax and interest.

Small Company Universe includes all equities listed in The Russell 2000 and Russell Microcap Indexes plus an approximate 1,000 U.S. listed micro-cap equities not listed in the Indexes.