The small- and micro-cap markets started the third quarter with a modest correction, but finished the quarter with a monster gain in September. All equity markets produced posi- tive results in the third quarter, but the real stars were smaller stocks. As you can see from the table below, the Russell 2000 Index outperformed the large-cap Russell 1000 Index in both September and the third quarter. The Russell Microcap Index was the strongest performer with a 8.15% gain in September and a 6.65% gain for the quarter. The renewed promise of lower taxes from the Trump Administration was certainly a big catalyst for the rally. However, the strengthening economy and improved corporate profits were also reasons for the gains.

A deeper look at the recent performance of value and growth stocks show that leadership may be changing. While value related stocks performed well in 2016, the real leader this year has been growth stocks. As the table below shows, growth has been the place to be year-to-date, as well as for the third quarter, but value stocks outperformed growth in September. As measured by the Russell Value and Growth Indexes, this outperformance was the case for large stocks, small stocks, and micro-cap stocks.

The change in leadership may be related to the movement within the bond market. The 10-year Treasury yield hit a recent low of 2.05% on September 7th, but climbed the rest of the month to its current level of 2.35%. In our opinion, a rising yield environment tends to be a positive for value-oriented stocks, and not necessarily for long duration sensitive growth stocks. Regardless, we are encouraged by these recent trends, mainly because the overall breadth of the market is improving. While value has outperformed growth, all stocks are rising.

It remains to be seen if the recent renewed strength in small stocks and value stocks will continue in the near term. However, we often remind ourselves and our investors about history. We believe the small stock market experienced a stealth bear market in both 2014 and 2015, which was followed by a real bear market from June 2015 to February 2016. The Russell 2000 Index and the Russell Microcap Index declined in that bear market by more than 26% and 29% respectively. Small stocks have not experienced a significant decline since the lows of February 2016, which means this bull market was only 19 months ago. In our opinion, the small-cap bull market still has room to run.

The Perritt MicroCap Opportunities Fund, the Perritt Ultra MicroCap Fund and the Perritt Low
Priced Stock Fund will pay a distribution on 11/17/17 to shareholders. Based on estimates:

Shareholders of record on 11/17/2017 will receive distirubtions. 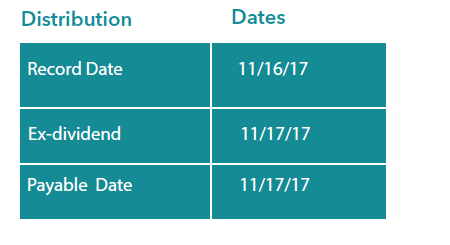 Distribution figures and distribution dates are estimates only and are subject to change. Actual distributions may be substantially different (higher or lower) or may not be distributed at all.

Actual distributions on a dollar per share basis will be available on or after 11/17/17.

Earnings Growth is not a measure of the Fund’s future performance.