OUR BULLISH TAKE ON SMALL-CAPS

According to Furey Research Partners, “whenever small-cap stock returns have been this poor in the third quarter, fourth quarter returns and even forward 6-month returns have been positive.  Since 1940, excluding third quarter 2015, there have been 11 other years in which small-cap stocks were down 10 percent or more in the third quarter.*  On 10 of those 11 occasions, small-cap stocks posted positive returns in the fourth quarter. Another bullish supporting point, the average bull market lasts seven plus years while the current bull market is only 6 years old.”  While the past behavior of the market can’t predict the future, we believe the recent declines present an attractive entry point for new investments. 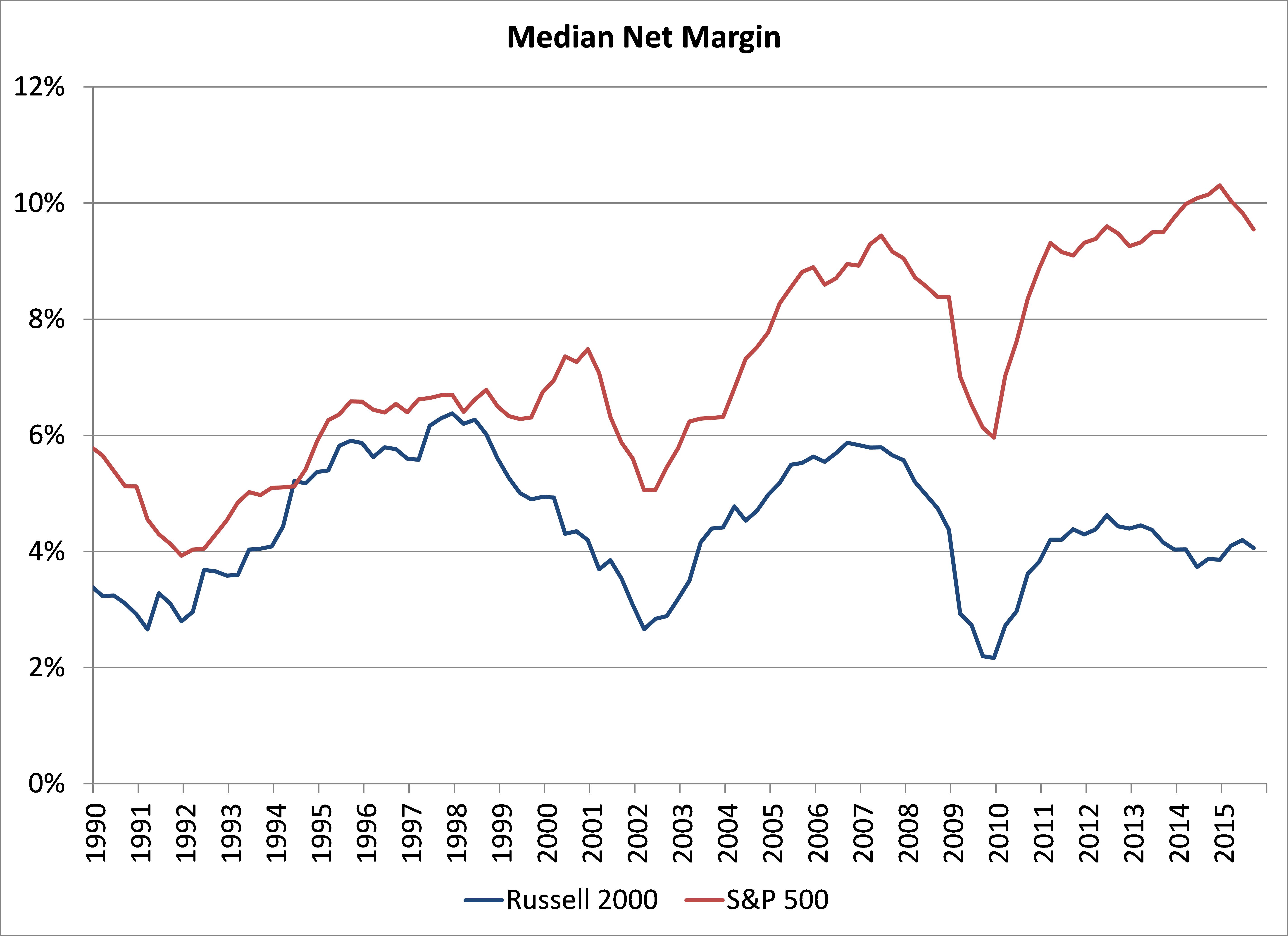 (Click for larger image)
Bears have often argued that net margins are too high and normal competitive pressures should bring net margins lower.  As can be seen in the graph, large-cap stock’s net margins have climbed significantly in the past few years, and even since the early 1990’s.  While net margins have modestly improved in the past few years for small-cap stocks, they have been stagnant for the past two decades.  We believe net margins have not improved for smaller-cap stocks due to their business investments.  In fact, capital expenditures have been rising significantly for the average company within our MicroCap Opportunities Fund.  We will outline this interesting fact in a new white paper next month.  Please stayed tuned.

The research team at Perritt Capital Management just finished putting together our Perritt Small-Cap Insights, a comprehensive report with more than 50 slides of charts and tables detailing our positive outlook for small-cap stocks.  Here we present a few charts from that comprehensive report. E-mail Mark Oberrotman – mark@perrittcap.com, or call 800-331- 8936 if you would like to see the full deck of slides.

Large-cap margins have been rising relative to small-caps for nearly 25+ years, but can this continue?

SMALL CAPS VS. LARGE CAPS: WHERE CAN INVESTORS FIND GROWTH? 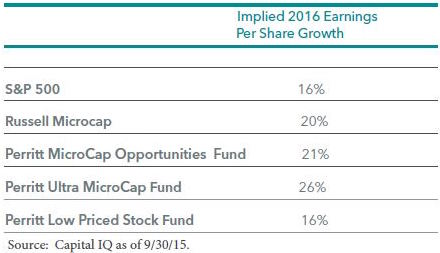 “Small-cap stocks are less expensive than large-cap stocks and we believe they also should have the strongest earnings growth over the next few years.”

Net Margin is the ratio of net profits to revenues for a company. Price-To-Sales Ratio (P/S) is a tool for calculating a stock’s valuation relative to other companies, calculated by dividing a stock’s current price by its revenue per share. Price-Earnings Ratio (P/E) is a valuation ratio of a company’s current share price compared to its per-share earnings. It is calculated as the market value per share divided by earnings per share. Russell 2000 Index is an index measure the performance approximately 2,000 small-cap companies in the Russell 3000 Index, which is made up of 3,000 of the biggest U.S. stocks. Russell Microcap Index is a capitalization weighted index of 2,000 small-cap and micro-cap stocks that captures the smallest 1,000 companies in the Russell 2000, plus 1,000 smaller U.S.-based listed stocks. S&P 500 Index is an index of 500 stocks chosen for market size, liquidity and industry grouping, among other factors. The S&P 500 is designed to be a leading indicator of U.S. equities and is meant to reflect the risk/return characteristics of the large cap universe. The Center for Research in Security Prices (CRSP) is comprised of nearly 4,000 constituents across mega, large, small and micro capitalizations. F -Forward Earnings Per Share (EPS) is the portion of a company’s profit allocated to each outstanding share of common stock. Earnings per share serves as an indicator of a company’s profitability. Forward Earnings is a company’s forecasted, or estimated, earnings made by analysts or by the company itself. Price-to-Book Value Ratio (P/BV) is a ratio used to compare a stock’s market value to its book value. It is calculated by dividing the current closing price of the stock by the latest quarter’s book value per share. Market Capitalization (Mkt Cap) is the total dollar market value of all of a company’s outstanding shares. Market capitalization is calculated by multiplying a company’s shares outstanding by the current market price of one share. Average stock is the average value of a stock over an accounting period.

* Small-cap stocks are measured by CRSP 6-8 decile before 1979 and Russell 2000 since 1979 according to Furey Research Partners.