Should I Stay or Should I Go?
Evaluating MicroCap Valuations in a Rising Market

Both of our microcap funds reached all-times highs during the quarter. As
we explained in our research paper Deja vu All Over Again: Serial Correlation
and Micro-Cap Equities, investors shouldn’t be surprised that micro-cap
stocks have continued to provide rewards after a strong year in 2012. Periods
of strong micro-cap performance, such as what began last year, typically last
several years or more.

Following our recent strong performance, however, many investors are asking
us if valuations have become stretched. We can answer this by showing how
we examine valuations as part of our investment process. Simply put, the question we ask ourselves when deciding if we should let a winner run is: “can this become a multi-billion dollar company?”

When a previously underfollowed company begins to attract the market’s attention the gains can be significant, prompting us to decide if it is time to “feed the chickens,” or sell the stock to the next tier of small- or mid-cap investors. However, some companies can justify P/E ratios of 20 or 30 if future growth opportunities remain compelling. Others, as we show below, cannot.

Barrett Business Services (BBSI) is an example of a company that we believe still has significant upside despite a higher P/E. Barrett helps HR departments of small-and mid-size companies outsource management and reduce cost inefficiencies. We first purchased the stock nearly ten years ago at $5 and a market cap of $55MM. Today Barrett is over $70 and the market cap is $550, but the company’s upside is still exciting. Barrett is growing its top line near 20%
and has done so consistently over the past decade. Despite this growth, the stock was stuck between $15 and $20 for many years until an overhang of shares was removed by management earlier this year, serving as a major catalyst for price appreciation.

Today, Barrett operates only on the West Coast, and the company is beginning to expand East. We believe the recent surge in price is only a reflection of the company’s true value that was previously mispriced. If Barrett can execute its expansion East, it can become a multi-billion dollar company, and investors would be rewarded from here.

Ducommun (DCO) is an example of a company that we decided to sell because of valuations, despite it being a recent winner in the portfolio. Ducommun provides components to the aerospace and defense industry including companies like Boeing. The company’s growth has been very impressive, expanding its market cap from $150 when we purchased it to over $300MM today. Much of this growth was bought through acquisition, however, as opposed to internal growth. We benefited from this consolidation play but future opportunities depend on the company continuing to acquire other businesses. In our view, the risks that Ducommun overpays for future acquisitions or is not able to integrate it properly outweigh the potential rewards. We decided to take profits on Ducommun despite its P/E of 18 being much lower than Barrett’s P/E of 33. 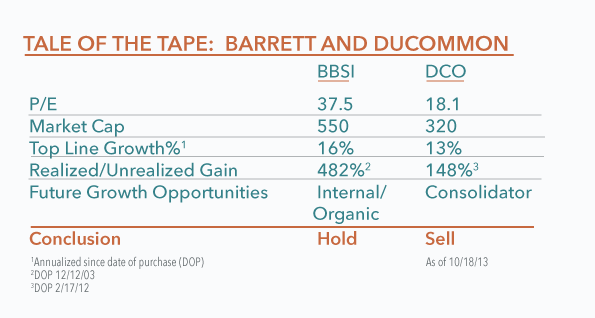 How Expensive is Your Asset Class? Look Beyond The Index

The micro-cap asset class is vast. Our investable universe includes approximately 3,000 companies with valuations and characteristics that vary widely. Generally, we own 100-150 names, about 5% of the universe. With so many options to choose from, the characteristics of our portfolio are not dependent on the average valuations of the index. There are hundreds of small companies with P/E ratios below 10. Conversely, many more can be found with P/E’s above 40. The fact that the P/E of the Russell Microcap Index is 19 actually tells us very little about individual buying opportunities.

Compare this to large-cap investing. Today the P/E of the S&P 500 is 20. With so many eyes on each of the 500 companies there is little room for inefficiencies. And with only 500 names to choose from, the index’s P/E of 20 is more truly reflective of the investable universe.

Next month we will be finishing a new research paper, The Skewed Distribution of Micro-cap Index Valuations, that looks to show how an accurate assessment of valuation for the micro-cap asset class requires a deeper analysis of the index. We take a look under the hood of the microcap index to show the distribution of companies by P/E ratios across the index. Readers will find that, like most things microcap, there is much more to the index than can be neatly summarized in one number. 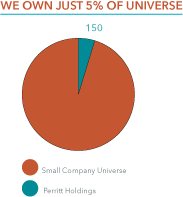 ROE is the amount of net income returned as a percentage of shareholders equity. Price to Earnings Ratio is a valuation ratio of a company’s current share price compared to its per-share earnings. Correlation is a statistical measure of how two securities move in relation to each other. The Russell 2000 Index consists of the smallest 2,000 companies in a group of 3,000 U.S. companies in the Russell 3000 Index, as ranked by market capitalization. The Russell Microcap index is a capitalization weighted index of 2,000 small cap and micro cap stocks that captures the smallest 1,000 companies in the Russell 2000, plus 1,000 smaller U.S.- based listed stocks. It is not possible to invest directly in an index.