“YOU CAN’T ALWAYS GET WHAT YOU WANT”

Low cost passively managed funds have been all the rage for investors in the past few years. According to Morningstar, investors have pumped $437 billion into passively managed funds in the past twelve months while yanking $303 billion from actively managed funds. Given recent rule changes, this interest in passive funds could grow further. The Department of Labor (DOL) earlier this year introduced a new Fiduciary rule, set to take effect in April 2017, which holds individual advisors who work with tax-advantaged retirement accounts to a fiduciary standard, meaning they must work in the best interest of clients. At the top of advisor’s and investor’s minds is cost, which can lead them to passively managed funds. Morningstar also recently said the new Fiduciary Rule by the DOL could attract as much as another $1 trillion into passive funds. 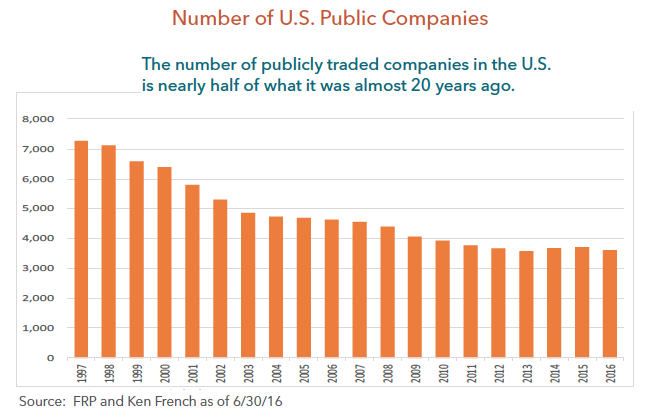 Before you go out and join the others in buying passive funds, we believe it is important to understand history and the details of the indexes used to create these passive funds. The number of publicly traded companies in these indexes has declined dramatically in the past 20 years, which we believe has huge implications for passive investors. As you can see from the chart above, the number of U.S. companies listed on the major exchanges has declined from more than 7,000 to less than 3,600 today. We think it is quite ironic that the Wilshire 5000 Index only has 3,600 U.S. companies in the index.

There are several reasons for the decline in public companies, but many are related to the lack of IPOs and the regular occurrence of mergers and acquisitions. We would argue that quality companies are routinely acquired, therefore there are less public companies which reduces the quality of the indexes. In fact, one of the most important factors we use to judge company quality is profitability.

As I mentioned earlier, investors are flocking to passively managed funds, which include products that mirror the Russell 2000 Index and the Russell Microcap Index. In the past 10 years or so, we have seen assets invested in these vehicles grow from less than $1 billion to tens of billions. For example, iShare offers IWM, which is an ETF tracking the Russell 2000 Index. This passive fund has grown from less than $1 billion in assets a little more than 10 years ago to nearly $30 billion today, and this is only one of several passive funds in the small-cap space.

The bottom line is that we believe investors want a low cost diversified portfolio of high quality stocks, but you can’t always get what you want. We believe if investors are willing to pay a little more for the skill of an active manager, they can get what they need.

1The investment adviser has voluntarily agreed to waive fees and/or reimburse operating expenses (other than interest, brokerage commissions, dividend expense on short sales, taxes, extraordinary expenses and acquired fund fees and expenses) through 2/28/2017.

The Perritt MicroCap Opportunities Fund and the Perritt Ultra MicroCap Fund paid distributions on 11/18/2016 to shareholders of record on 11/17/2016. 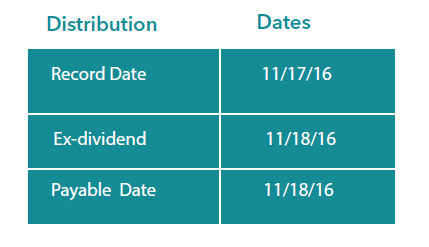 *Profitable companies are companies  with  a  positive  net  income.  Price/Revenue  (P/R)  is  a valuation  ratio that compares a company’s stock price to its revenues. Price/Book (P/B) is a financial ratio used to com- pare a company’s stock price to its book value. P/E is short for the ratio of a company’s share price to its per-share earnings. Russell 2000 Index is an index that measures the performance of approximately 2,000 small-cap companies in the Russell 3000 Index, which is made up of 3,000 of the biggest U.S. stocks. Russell Microcap Index is a capitalization weighted index of 2,000 small-cap and micro-cap stocks that captures the smallest 1,000 companies in the Russell 2000, plus 1,000 smaller U.S.-based listed stocks. Wilshire 5000 Index is a market capitalization weighted index of the market value of all stocks actively traded in the United States. Price/Sales (P/S) compares a company’s stock price to its revenues. Ttm P/E is the trailing twelve months P/E. Breadth is a technique used in technical analysis that attempts to gauge the direction of the overall market by analyzing the number of companies advancing relative to the number declining. Median Gain/Loss Percentage is the middle number in a sorted list of gains and losses.

Past Performance does not guarantee future results. The Perritt Funds are distributed by Quasar Distributors, LLC.