Lately it feels like the market has been playing a game of Whac-a-Mole. The moles (market worries) pop up from their holes at random and the market moves down accordingly until the mole goes back into its hole, or the worries have been placated. There are many types of “moles”: recession, longevity of this bull market, interest rates, Trump, Iran, tariffs, and rising levels of debt to name a few. We can see some mole events in the following chart as indicated by the red spikes and the market reaction to them. 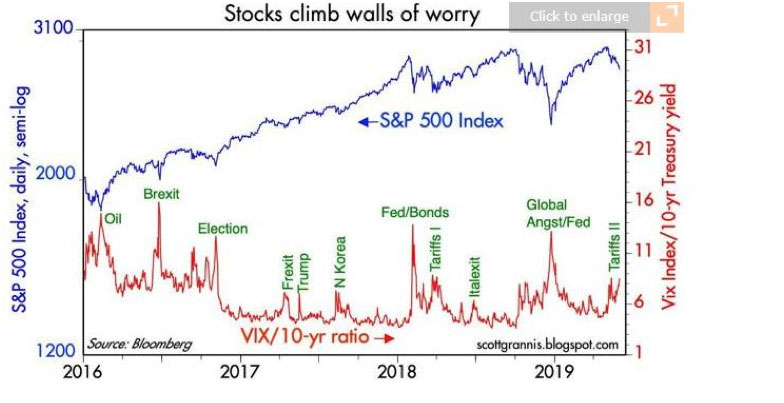 The biggest threat may be the Fed and interest rates. In May, Powell said it was unlikely the Fed would cut rates. As soon as a month later, he indicated that the case for a rate cut was strengthening. The market and the Fed seem to be at odds though. Futures trading points to four cuts in the next year. We could see a big drop in the market if the Fed doesn’t acquiesce. The case for cutting rates does seem stronger though: global economic data is mixed, tax-cut stimulus is finished, and the trade war is taking a toll.

This has all resulted in many nervous investors. They have turned to bonds and other vehicles, such as low volatility ETFs and Quality ETFs to minimize a downfall in the market. Individual investors are on track to buy a majority of the U.S. government’s newly issued longer term debt. This is a first since the Treasury Department began publishing data from its auctions. The 10-year Treasury note has fallen to multi-year lows.  An investor recently stated, “What they’re yielding right now doesn’t matter – I’m looking for downside protection.”  Are we headed the way of Europe and Japan?  Negative interest rates in Europe and Japan have left investors effectively paying governments to hold their money when they purchase 10-year government securities. Funds that focus on low volatility have also become popular taking in nearly $12 billion year to date, more than double that of any other factor this year and the most for a six-month period since 2016. 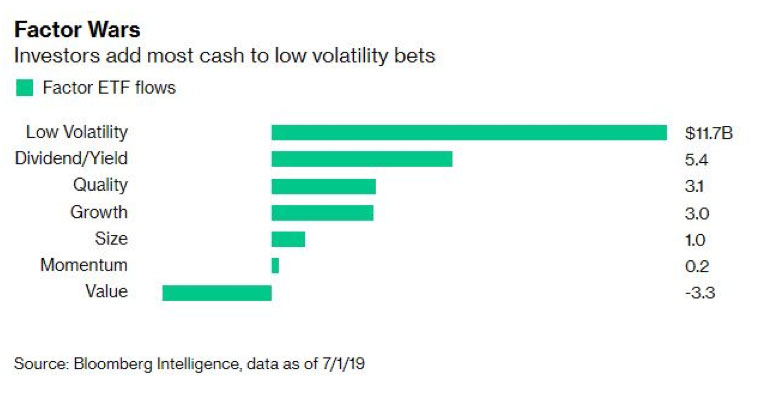 While the overall stock market continues to play this game of Whac-a-Mole, we have noticed a new trend emerge in the past few months within the micro-cap space.  We have seen a waive of merger and acquisitions as well as significantly positive news items from micro-cap companies. Not only did five of our companies get buyout offers, ten companies made accretive acquisitions themselves. Below are just a few of the positive news we saw from our portfolio companies in the past three months.

S&P 500 Index is a market capitalization weighted index of the 500largest U.S. publicly traded companies which is regarded as the best gauge of large-cap U.S. equities.
Volatility Index, or VIX,is a real-time market index that represents the market’s expectation of 30-day forward looking volatility.  Derived from the price inputs of the S&P 500 index options, it provides a measure of market risk and investors’ sentiments.

Click here for a current prospectus. Fund holdings and sector allocations are subject to change at any time and should not be considered a recommendation to buy or sell any security.   Click here for the Fund’s top 10 holdings:  PRCGX, PREOX.