The first quarter of 2017 was an interesting quarter in that performance was a reversal of 2016 and particularly the fourth quarter of last year. As you can see from the table below, larger stocks outperformed smaller stocks. As measured by the S&P 500 Index, large stocks gained more than 6 percent while micro-cap stocks barely produced a gain, as the Russell Microcap Index rose by only 0.4 percent. In addition, growth stocks outperformed value stocks in the first quarter, which is also the opposite of what happened last year. 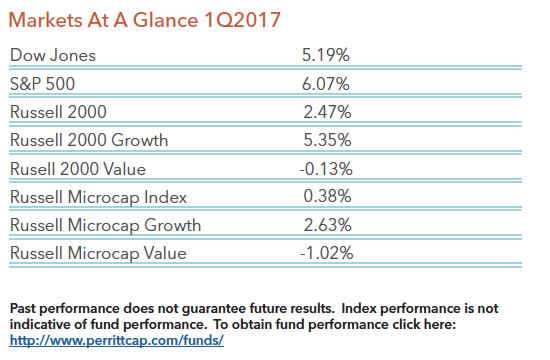 A closer look within each of these sectors reveals that high  return on invested capital (ROIC) companies performed worse than  the rest of the market in the first quarter. For example, the top  25% of ROIC companies’ stocks declined 1.91%  versus a 2.86%  gain  for the  bottom 25% of ROIC companies.  We view this recent underperformance as a short-term reversal from the past year, but not a change in trend. In other words, high quality  companies have  been the leaders in the past year, and we expect them to resume their leadership later  this year.  Let’s review  a few of the reasons we remain optimistic.

First, we  believe we  are still early in the  bear market recovery or  new  bull  market for smaller-cap stocks. As we  noted in our commentary a year  ago, the  bear market for smaller companies ended on  February 11,  2016.  Since  that  date, smaller companies have  performed well,  but  certainly not  in a  straight line.   We also  noted in our  commentary that bull  markets usually  don’t  end within  a year.   Bull markets tend to  last  at  least  a few years.  We updated  our  tables of bear  market recoveries below. As  you   can   see  from   the   two   tables  below, the   6-month and  12-month performance for  the  current recovery are approximately 10  percentage points behind the  average for  the  Russell  2000 Index, and  approximately 12  percentage  points behind the   average for  the   Russell  Microcap  Index.     These  results give  us  confidence that  the  future 3-year performance for the  current cycle  could be similar  to  the  past averages. 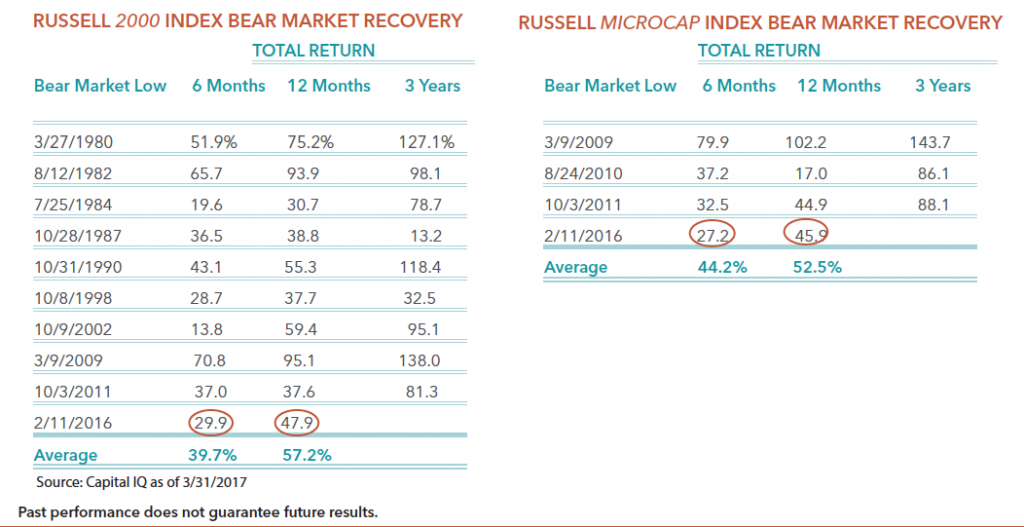 Lastly, the Trump Administration has several initiatives that are pro-business. Some of those initiatives include tax reform, regulation reform, and various infrastructure improvements. While it is unlikely that most of these initiatives will make it past congress, some will, which will be positive for equity markets.

Earnings Growth is not a measure of the Fund’s future performance.