The first quarter of 2016 proved to be very volatile for the equity markets. While there are several factors that contributed to the volatility, the Federal Open Market Committee (FOMC) shifting from hawkish to dovish policy is certainly a big one. A hawkish policy favors higher interest rates and tighter monetary controls to keep inflation in check. A dovish policy refers to an economic outlook which generally supports low interest rates as a means of encouraging growth within the economy. It was surmised by many that the FOMC would raise interest rates four times this year, but recent consensus is for perhaps only two hikes in 2016. The small- and micro-cap market started the year off with a 16.04% decline in the Russell 2000 Index and a 17.50% decline in the Russell Microcap Index through February 11, 2016. However, the markets rebounded nicely in the second half of February and March to finish down modestly. As seen in the table below, the Russell 2000 Index lost 1.52% and the Russell Microcap Index lost 5.44% for the first quarter of 2016. 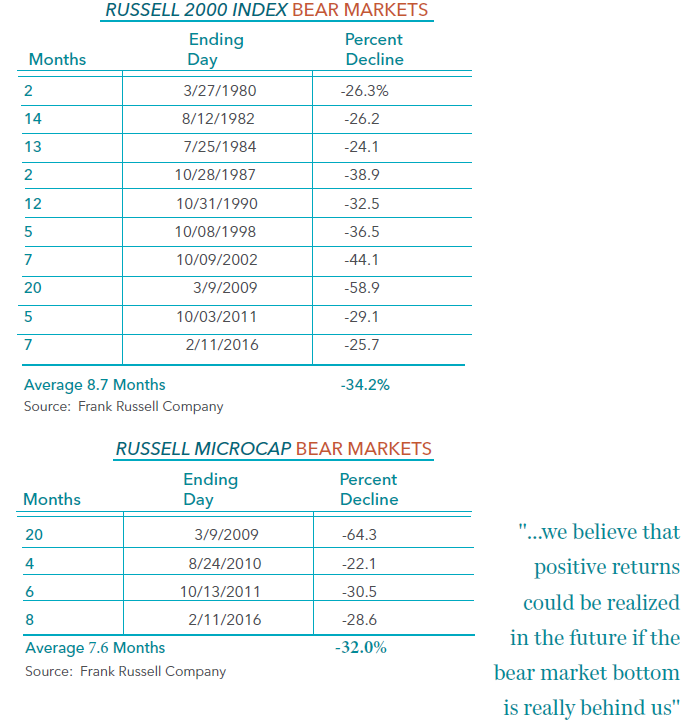 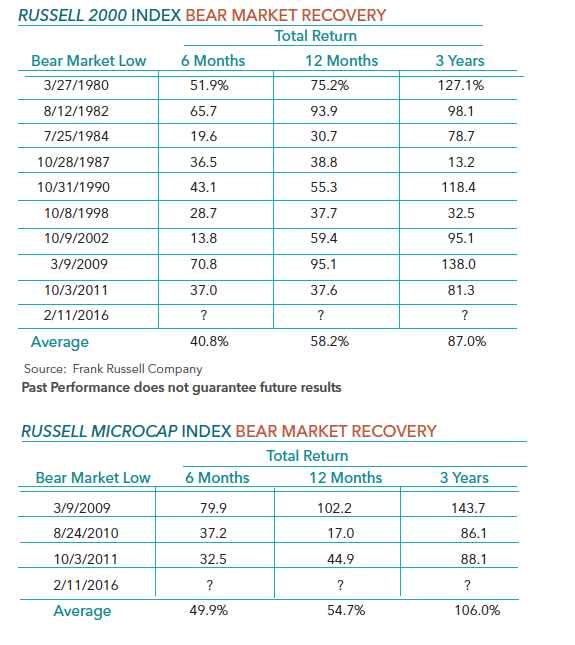 Federal Open Market Committee (FOMC) is the branch of the Federal Reserve Board that determines the direction of monetary policy. Russell 2000 Index is an index measure the performance approximately 2,000 small-cap companies in the Russell 3000 Index, which is made up of 3,000 of the biggest U.S. stocks. Russell Microcap Index is a capitalization weighted index of 2,000 small-cap and micro-cap stocks that captures the smallest 1,000 companies in the Russell 2000, plus 1,000 smaller U.S.-based listed stocks. S&P 500 Index is an index of 500 stocks chosen for market size, liquidity and industry grouping, among other factors. The S&P 500 is designed to be a leading indicator of U.S. equities and is meant to reflect the risk/return characteristics of the large cap universe.  Dow Jones Industrial Index is a price-weighted average of 30 significant stocks traded on the New York Stock Exchange and the NASDAQ. Bear market is a market condition in the prices of securities are falling, and widespread pessimism causes the negative sentiment to be self-sustaining. A downturn of 20% or more in multiple broad market indexes, such as the DJIA or S&P 500, over at least a two month period, is considered an entry into a bear market.

Fund holdings and sector allocations are subject to change at any time and should not be considered a recommendation to buy or sell any security. Click here for the Funds’ top 10 holdings: PLOWX, PREOX, and PRCGX.