One of the primary duties of the Federal Reserve is to foster economic conditions that achieve price stability. Over the past 12 to 18 months, the Fed has explained that the inflation we have been experiencing is short-term and transitory. They have maintained that price stability will return soon. In November 2021, however, the Fed abandoned the “transitory” statements, acknowledging longer-term inflation in the economy. What factors influence the Fed’s decisions and actions? In addition to raising the Fed Funds rate recently, we see several economic indicators that lead to the expectation that the Fed will raise the Fed Funds rate several more times. With the Consumer Price Index and the Producer Price Index reporting the highest increase in more than 30 years, some believe 6 or 7 increases are likely in the next year.

The numbers tell the story, and they appear to be forcing the Fed to head back to their playbook. The question is: How do rising interest rates impact stock prices, particularly micro-cap stocks? In the table below, we assembled the past twelve periods when the Federal Reserve raised the Fed Funds rate. This data comes from the Federal Reserve Economic Data (FRED). As you can see, the average length of time the Fed raised rates was 24 months, with the least time being 6 months and longest being 53 months. We also included the range of increases which include a modest increase of rates from 4.75% to 6.54% in the 1999/2000 period to a drastic increase of 4.61% to 17.61% in the 1977/1980 period.

the twelve periods when the Fed raised rates, and the average gain was more than 25%. There are two notable periods I would like to address. First, the 1972 to 1974 period certainly was a negative period for micro-cap stocks with a 40.61% decline, but that period was also plagued by other social and severe economic factors. However, the second period to note is 1977 to 1980 which was also affected by several social and economic factors. Although inflation was severe in the late 1970s, the strength of the economy drove the performance of micro-cap stocks to an exceptional gain of nearly 84%. We believe that the current economic situation could be like the second period. While inflation is part of the picture, we expect that the strength of the economy could drive robust performance for micro-cap stocks. 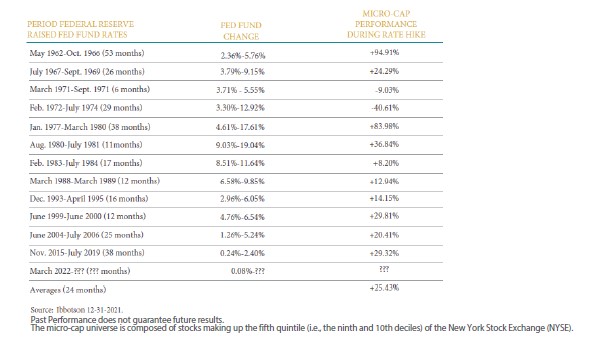 The micro-cap universe is composed of stocks making up the fifth quintile (i.e., the ninth and 10th deciles) of the New York Stock Exchange (NYSE).

Mutual fund investing involves risk. Principal loss is possible. The Funds invest in smaller companies, which involve additional risks such as limited liquidity and greater volatility. The Funds invest in micro- cap companies which tend to perform poorly during times of economic stress. The Perritt MicroCap Funds may invest in early-stage companies which tend to be more volatile and somewhat more speculative than investments in more established companies.

Past Performance does not guarantee future results.

Consumer Price Index (CPI) is a price index, the price of a weighted average market basket of consumer goods and services purchased by households.

Producer Price Index (PPI) is a price index that measures the average changes in prices received by domestic producers for their output.