Why Invest In Micro-Cap?
Numbers Speak Louder Than Words: 2013 Review

“Why should I include micro-cap as part of my small-cap allocation?” It is a question we hear often from investors. The answer is that, since 1926, micro-cap investments have increased the return and reduced correlation within a diversified portfolio (as documented by Rolf Banz & Ibbotson & Associates1). Ask an investor to consider the benefits shown in 87 years of data, however, and you’ll quickly see their eyes begin to glaze over. The rewards of investing in micro-cap are easier to understand when you look closely at a period when micro-caps began to perform well. Last year was certainly part of this cycle, as we will see below:

The chart below illustrates why we believe it makes sense to include micro-cap within a small-cap allocation. 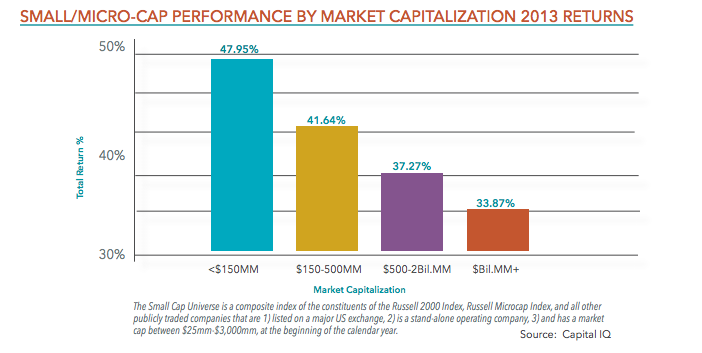 We believe that the inefficiencies that exist in the micro-cap asset class make it a good place for active management. After a few years where active management lagged, the trend shifted in 2013. With certain companies becoming too expensive in our opinion (and the Russell Microcap Index’s nearly 30% weight to Financials), we believe this trend can continue.

Current standardized performance of the Fund and performance data to the most recent month end may be obtained by clicking here. It is not possible to invest directly in an index.

As is usually the case in micro-cap investing, the investments that worked best accounted for much of the overall return. By the end of the year, we had taken profits on all of the below names to reinvest in what we believe could be next year’s winners.

Price-to-Sales Ratios for are still below recent highs. For a more detailed analysis of recent valuations see our recent research paper: Are Micro-cap stock valuations high or low? Maybe both.

Price to Sales ratio is a tool for calculating a stock’s valuation relative to other companies, calculated by dividing a stock’s current price by its revenue per share. Beta measures the sensitivity of rates of return on a fund to general market movements. R-Squared is a statistical measure that represents the percentage of a fund’s or security’s movements that are explained by movements in a benchmark index. Correlation is a statistical measure of how two securities move in relation to each other. The Russell 1000 Index is an index of approximately 1,000 of the largest companies in the U.S. equity markets. The Russell 2000 Index consists of the smallest 2,000 companies in a group of 3,000 U.S. companies in the Russell 3000 Index, as ranked by market capitalization. The Russell Microcap index is a capitalization weighted index of 2,000 small cap and micro cap stocks that captures the smallest 1,000 companies in the Russell 2000, plus 1,000 smaller U.S.-based listed stocks. It is not possible to invest directly in an index.