Wall Street and Main Street Get a Divorce

Wall Street and Main Street have gotten a divorce, or at the very least they have separated.  The U.S. is in a recession but the stock market marches blindly higher.  In most people’s lives we have never seen such a confluence of dangers: Depression levels of unemployment, the economy in a downward spiral, prevalent rioting and unrest, and an imminent second wave of the virus.  Yet the stock market continued upward and celebrates information, such as jobs data that is slightly misleading.  The S&P 500 has had the biggest rally in its history.  It plummeted 34% from its mid-February high to bottom on March 23.  It has since rocketed up 43%. 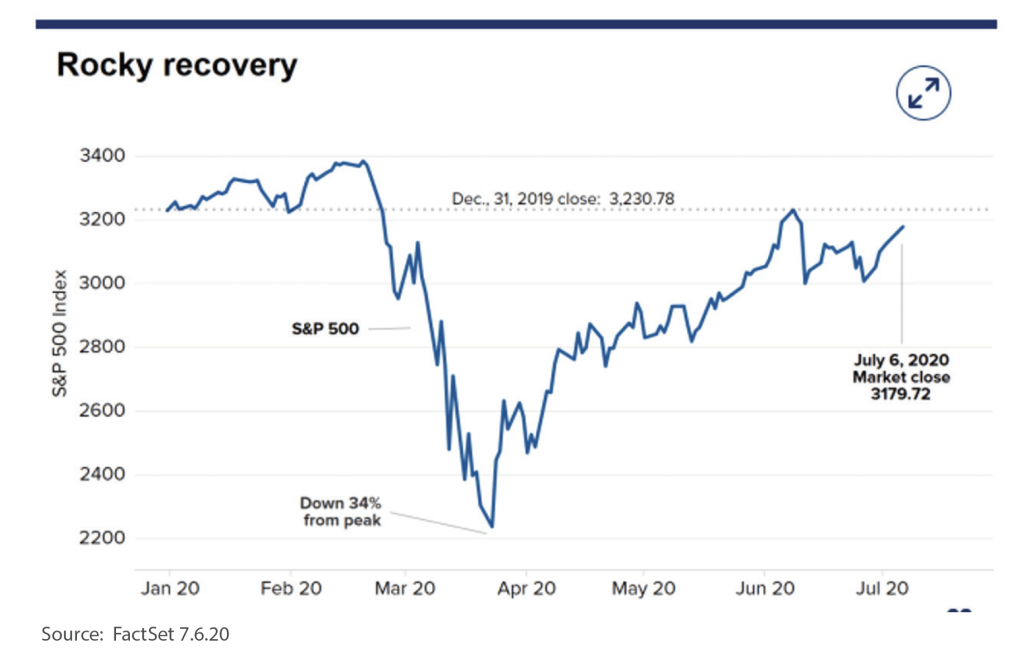 We have long been told that the market is forward thinking, and the economy looks backward.  But these are unprecedented times.  Economic data has surprised to the upside but has already lagged again making the data stale almost immediately. Uncertainties, which the market hates, are in abundance.  Will states shut down again (as some are already doing)?  When will a vaccine be available?  How many businesses will permanently close?  Will generous unemployment benefits and another stimulus be extended?  And the big looming question, who will win the Presidential election in November?  Many small businesses, which have been hit the hardest, are not publicly traded so they are not reflected in the market.  We seem to be a market of wishful thinkers, but if just one of the cogs in the wheel fails to work, what are the implications?  Has the market taken that all into account?

An explanation for a continued bullish market is that the worst is behind us and the economy will rebound quickly.  FOMO (fear of missing out) is at play here.  Who wants to miss out on performance like we have seen the last 10 years?  We also locked a population down with nothing to do, no sports to watch, no casinos to go to, and then put a stimulus check in their pockets. Robinhood, which caters to amateur traders, reported a record 3 million new accounts in the first quarter. 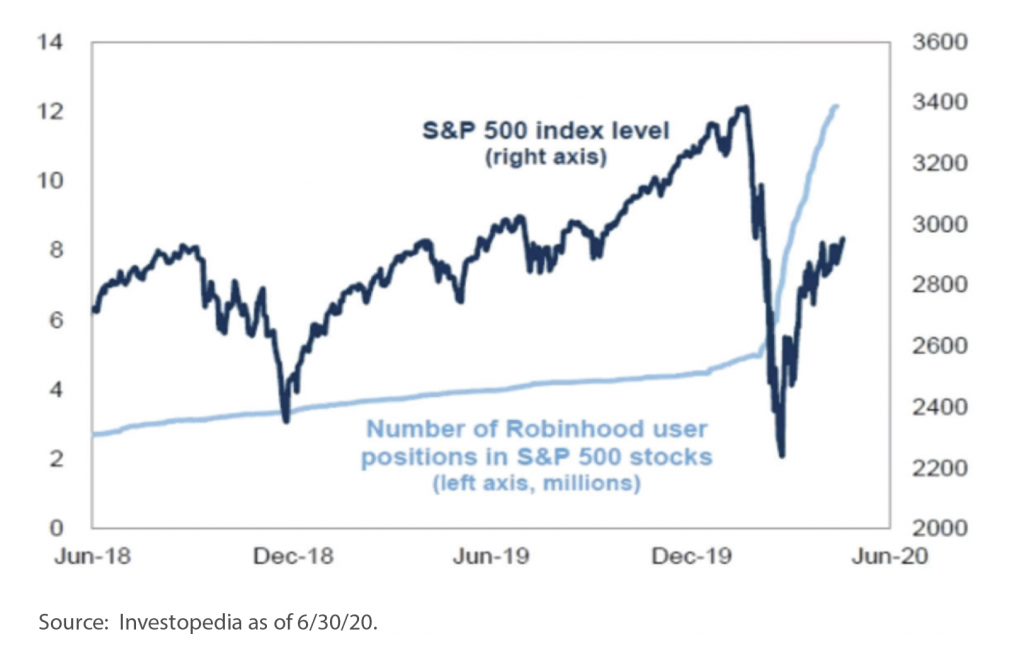 Another explanation is TINA – There Is No Alternative. Low interest rates have made bonds and money market accounts unappealing, so excess cash has been plowed into the stock market.

Given what we are all living with today, here is a great perspective

It is a mess out there now. Hard to discern between what’s a real threat and what is just simple panic and hysteria.  For a small amount of perspective at this moment, imagine you were born in 1900.

On your 29th birthday, the Great Depression begins.  Unemployment hits 25%, the World GDP drops 27%.  That runs until you are 33.  The country nearly collapses along with the world economy.

When you turn 39, World War II starts.  You are not even over the hill yet.  And don’t try to catch your breath.  On your 41st birthday, the United States is fully pulled into WWII.  Between your 39th and 45th birthday, 75 million people perish in the war.

Smallpox was epidemic until you were in your 40’s, as it killed 300 million people during your lifetime.

At 50, the Korean War starts.  5 million perish. From your birth, until you are 55 you dealt with the fear of Polio epidemics each summer.  You experience friends and family contracting polio and being paralyzed and/or die.

At 55, the Vietnam War begins and does not end for 20 years.  4 million people perish in that conflict.  During the Cold War, you lived each day with the fear of nuclear annihilation.  On your 62nd birthday you have the Cuban Missile Crisis, a tipping point in the Cold War.  Life on our planet, as we know it, almost ended.  When you turn 75, the Vietnam War finally ends.

Think of everyone on the planet born in 1900.  How did they endure all of that?  When you were a kid in 1985 and did not think your 85-year-old grandparent understood how hard school was.  And how mean that kid in your class was.  Yet they survived through everything listed above.

Perspective is an amazing art.  Refined and enlightening as time goes on.  Let us try and keep things in perspective.  Your parents and/or grandparents were called to endure all of the above – you are called to stay home and sit on your couch

Maybe we don’t have it that bad?

This too shall pass.

Gross Domestic Product is the monetary value of all finished goods and services made within a country during a specific period. GDP provides an economic snapshot of a country, used to estimate the size of an economy and growth rate.

Robinhood is a third-party broker that facilitates the purchase and sale of certain securities for individuals. Neither Perritt Funds nor Quasar Distributors have an affiliation with Robinhood. References to other investment companies should not be viewed as an offer of these securities.